The term Web 2.0 was coined by Darcy DiNucci in 1999 and popularised by Tim O'Reilly in a 2004 conference named Web 2.0. In the beginning, it wasn't totally clear what Web 2.0 really meant for the ordinary web consumer. Then it crystallised out that users associate with the term Web 2.0 an interactive internet. During that time, the first large collaborative dynamic websites were seen, such as Wikipedia and YouTube. Web 1.0 are static HTML pages that don't allow interaction.

For me, it's only natural to ask what's in there for mathematics and mathematicians. Are collaborative websites good for mathematics? (Maybe not, maybe they're just distracting). So let's talk about Math 2.0. One could define the term Math 2.0 to be the mathematical content in Web 2.0, so that would be math blogs, math wikis, math videos. Current math videos on YouTube are just videos captured from ordinary lectures, which could have been on Web 1.0 sites, too. Current math blogs are just like periodic mails on a mailing list, so the concept existed long before Web 2.0, although the make-up has changed and it's easier to find via search engines.

Let's have a look at some of the best Web 1.0 math websites:

And now, before I sketch my vision of Math 2.0, for some of the best Web 2.0 math projects:

UPDATE: For a list less biased by my personal interests, see the thread "most helpful math resources on the web" on MathOverflow

Math 2.0 is mathematics done collaboratively in genuine new ways over the internet.

This means, a website qualifies as Math 2.0 if it changed the way mathematicians collaborated.

However, it seems like the school education community, more focused on children, uses the term Math 2.0 as a buzzword for "learning math over the internet".
From the Delicious tag Math2.0 you can see that the term is also used for math blogging.

Keep in mind that all this 1.0, 2.0 buzzword terminology is just tagging some websites. It's not important, and as Tim Berners-Lee says, the web was always about communication from person to person, it's nothing new.

I have some ideas in my mind for a future Math 2.0 project, involving creative use of LaTeX, wikis and collaborative/social websites... but it will take another few years until the idea is ready to go public.

Where they talk about Web 1.0 and Web 2.0, the Web 3.0 is not far. Clearly, somebody must fill the buzzword Math 3.0 with some nonsense! Since this post is already long enough, I will speak about the semantic web, Web 3.0 and the great potential for mathematicians another time.

(And I'm really sorry that I didn't list all good math blogs or other math projects, not even all my favourite ones, like this wonderful blog about motivic stuff. However, if I missed a popular one, I would be happy to hear about it in the comments.) 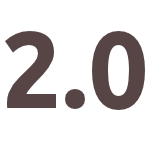